Fletcher Students “Safari” Back to School

Returning to school felt more like a jungle safari than an academic endeavor for students at the Fletcher Elementary School this fall. For the third consecutive year, the school welcomed students back by hosting a traveling art exhibit. This year’s featured artist was the French post-impressionist painter Henri Rousseau, whose works bring to life countless jungle images from the serene to the adventurous.

“When I walked through the front door it was like stepping into a wild jungle,” third grader Cody Savage said. “We had an art show last year, too, with Monet, and they make coming back to school even more fun.”

A relatively unsuccessful student when it came to traditional academics, as a boy, Rousseau won many accolades for his art. A tax collector by trade, Rousseau began painting seriously in his early 40’s and at age 49 quit his full-time job to become an artist, only to be ridiculed and criticized by the art community for his early primitive paintings. Rousseau later became known as a self-taught artistic genius.

The traveling exhibit of Rousseau’s work, which included three large tapestries, was on display at the Fletcher Elementary School for the first two weeks of classes. Featured paintings included Tiger in a Tropical Storm, which measures 17 feet in length, along with two smaller replica painting tapestries, The Snake Charmer and The Sleeping Gypsy, measuring four and eight feet in length, respectively.

Rousseau’s work was also the topic of art classes at the school during the two few weeks.

The festivities did not stop there. The school’s annual Welcome Back Family Breakfast featured jungle-themed baked goods, tropical fruits, and juices to coincide with the jungle paintings.

“It’s important for students to experience the work of a variety of artists in order to gather inspiration and to explore different subjects,” Art Teacher MC Baker said. “Rousseau’s traveling exhibit will show students something that they might not otherwise ever see. In smaller, rural communities, it is important to bring these experiences to students so that they can gather inspiration, learn about the masters and explore different materials and techniques.”

Students completed a variety of Rousseau-inspired art, read associated literature, and spent time touring the gallery. The artwork culminated in a hallway-long jungle exhibit at the school.

The exhibit was visited by several community members, as well. 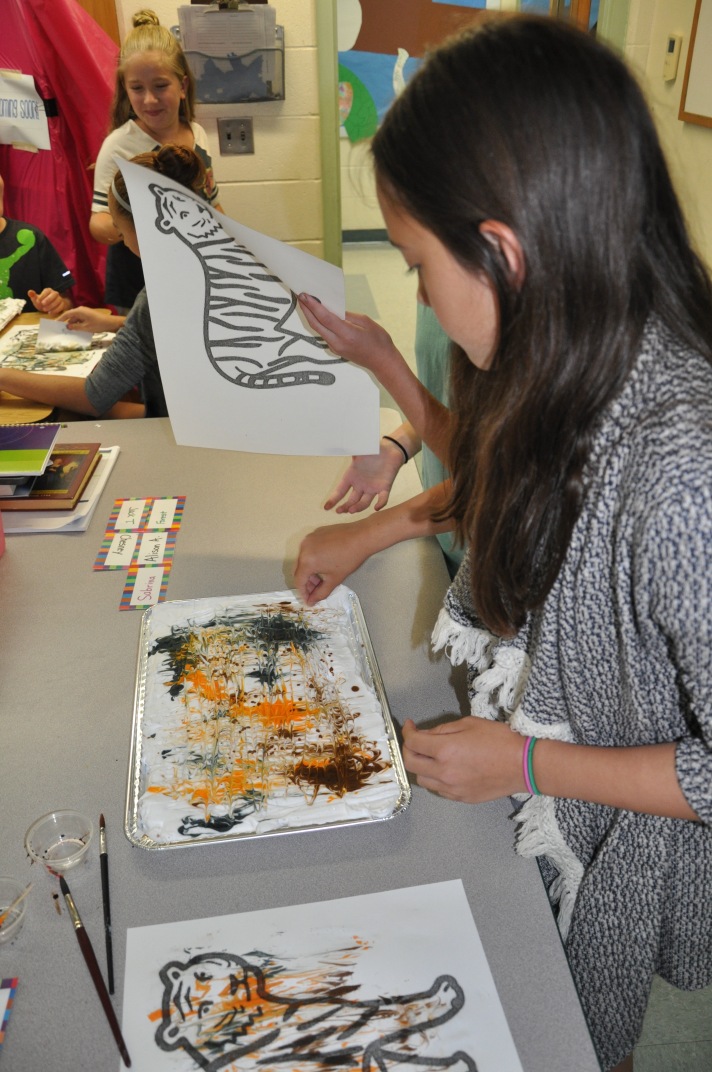 “I wouldn’t normally come into the school but this drew me in,” community member Margaret Plant said. “It’s important for our younger generation to know about and appreciate the artistic masters. But, it’s also important for schools to include their communities in their schools. This great show accomplished both.”

Both the art exhibit and the breakfast were generously sponsored by F.O.F.E., the school parent group.