Students at the Fletcher Elementary School were greeted by winding staircases, intricate stone castles, and majestic soaring birds as they kicked off the new school year on Tuesday.

The images are part of a traveling exhibit by Dutch artist MC Escher, whose mathematically-inspired work is being used to welcome students back to school in a creative and exciting way, and to help them make connections between art and a variety of other academic areas. 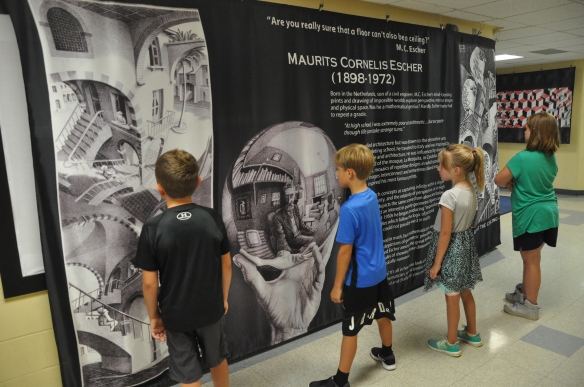 “The traveling exhibit is a really captivating and intriguing first exposure to the new school year for our students,” Instructional Coach Denette Locke said. “The moment students came through the door they began analyzing the artwork and noticing elements of symmetry, reflection, and dimension, which are all very important concepts in art, math, science and beyond.” 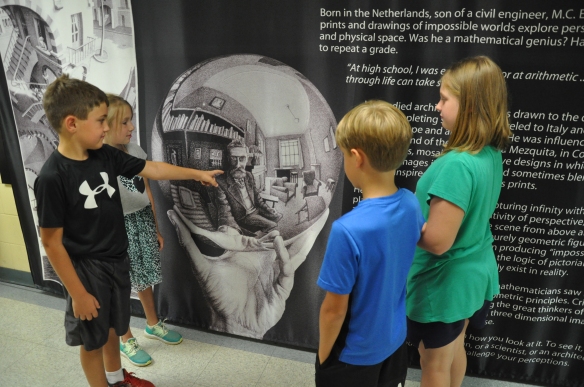 The exhibit consists of three large tapestries that include five well-known Escher works, as well as biographical information about the artist. This is the third year that Fletcher Elementary has opened the school with a traveling art show. Previously featured artists have included Vincent Van Gogh and Claude Monet.

“The artwork is interesting because it’s not what you would normally expect to see,” third-grader Donovan Austin said. “You really have to look at it because some parts are either upside down or flipped on their side. It’s unusual and shows you that different people see the world in different ways.”

Born Maurits Cornelis Escher in the Netherlands in 1898, the graphic artist is best known for his woodcut, lithograph and mezzotint prints that feature mathematical objects and operations like infinity, symmetry, geometry, and reflection, to name just a few. He is also well known for his tessellations, works that are made up of shapes that fit together perfectly to create a design. Escher, who struggled in school and repeated two grades, found inspiration in architecture, prompting a newfound interest in art and math.

“Even though he wasn’t good in school he found something that was really important and interesting to him,” Austin said. “When he found something he really liked, he did it and it made him happy and famous. He found out that he was really good at art and he could share that talent with everybody.”

“Escher is a perfect example of how, when students find their passion, it is energizing and inspiring, and can be used as a conduit for other learning. Imagine if Escher’s teachers had personalized his learning through the lens of art, how much more successful in school he might have been. As Fletcher teachers, we try to find every student’s jumping off point for learning.”

In addition to touring the exhibit and discussing Escher’s work, many students have begun creating their own tessellations inspired by the artwork and identifying tessellations all around them in a variety of settings. 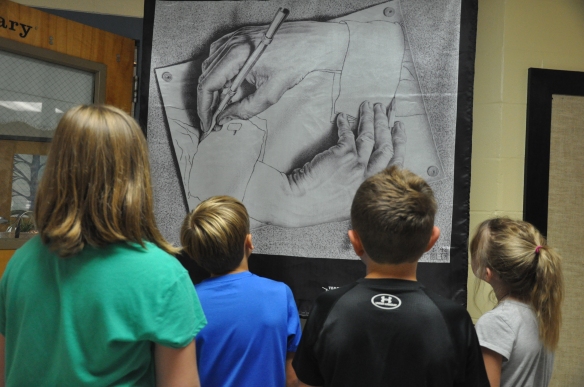 “We got to look at and eat real honeycomb and I saw that all of the hexagons in the honeycomb made a tessellation. They all fit together perfectly. I bet that was as much work for the bees as it was for Mr. Escher,” Austin said. “I think the honeycomb is that shape because it makes it a stronger place for the honey. I learned from this that the shape of something can tell how strong it is.”

“There are so many mathematical concepts in Escher’s work,” Locke said. “Everything from identifying shapes to thinking geometrically about how they fit together. Escher uses a great deal of problem-solving in his work, which makes him a terrific role model for the young problem-solvers we work with every day.” 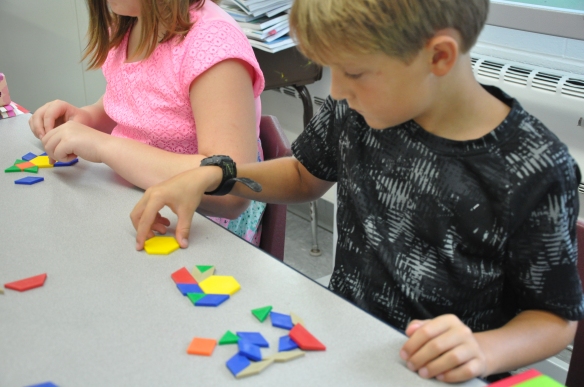 Along with the exhibit, Fletcher’s annual First Day Family Breakfast was themed on Escher’s work and life, including geometric waffle staircases and fresh fruits native to the Netherlands.

“This opportunity is all about students making connections,” third-grade teacher Tracey Godin said. “The more chances students have to experience a concept across settings, the more likely they are to generalize their learning and be able to apply it to real-world problems when it counts most.” 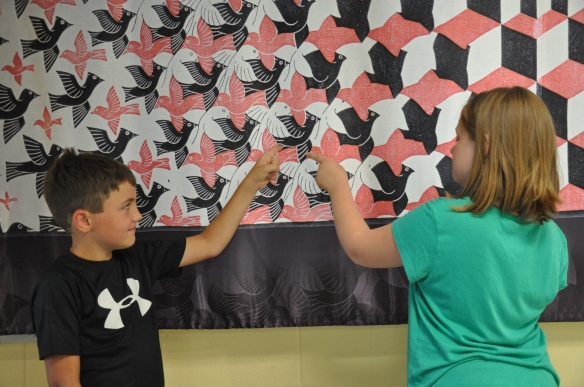 The MC Escher traveling exhibit will be on display at the Fletcher School through September 7. Visiting is free and the public is encouraged to drop by. Both the First Day Family Breakfast and the art exhibit were generously sponsored by Friends of Fletcher Elementary (FOFE), the school’s parent group.

Christopher Dodge is the Principal of Fletcher Elementary School and is a regular contributor to THE FWSU STORY. You can follow him on Twitter @FletcherFalcon