On November 9 and 10, eight BFA Fairfax student-athletes attended the 2015 Athletic Leadership Conference hosted by the Vermont State Athletic Directors Association (VSADA). This annual event, held at the Burlington Sheraton Hotel and Conference Center, brings together 300 of the top student-athletes from high schools all around Vermont for two days of leadership training and team building exercises led by renowned state and nationwide speakers.

BFA Fairfax has sent student representatives to this conference for the past decade, and the skills and strategies our students acquire have had a direct impact on not only these eight individuals, but on the overall success of our co-curricular programs and student body on the athletic fields and in the greater school community.

One of the highlights of the conference is the annual Scholar Athlete Banquet held Monday night, where the top ten senior student-athlete leaders (5 boys, 5 girls) from Vermont high schools are honored.  It was a special night for BFA Fairfax as two of our own student-athletes, Benjamin Bosland and Victoria Brown, received one of the ten scholarships from the VSADA.  Additionally, one of our football member-to-member athletes from Lamoille Union High School, Bill Hogan, was also a scholarship recipient.  Ben, Victoria and Bill gave powerful and inspiring acceptance speeches that highlighted the meaning of leadership, athleticism, and the power and impact of co-curricular participation. 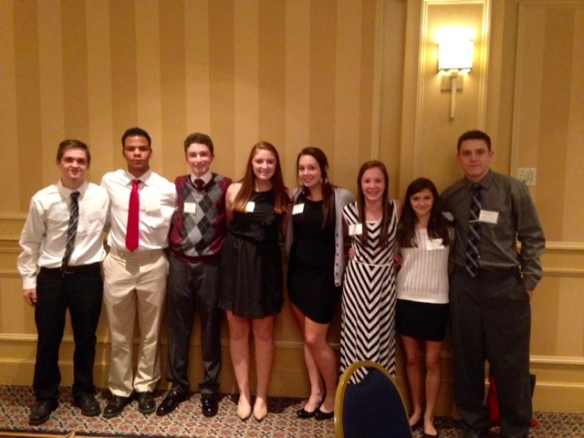 In an era where the media is often saturated with images of negative choices and actions in the realm of athletics, the VSADA Athletic Leadership Conference is an inspiring reminder of all that is good and meaningful in the world of high school athletics and co-curricular participation.  Our BFA Fairfax student-athletes are an impressive example of the impact of this opportunity on overall student success.