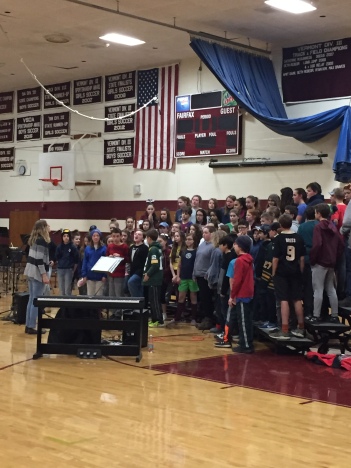 As winter turns to spring, the BFA Fairfax community looks forward melting snow, spring sports, and maple sugaring.  However, another popular event also marks this important time period during the school year. Every March, schools across the country celebrate Music In Our Schools Month (MIOSM).  MIOSM is an annual celebration during the month of March that engages music educators, students, and communities from around the United States in promoting the benefits of high quality music education programs in our schools.  BFA Fairfax has taken part in a multitude of activities during the past two weeks to show off the talents of our music department students and faculty, as well bring the community together to celebrate the benefits of music education.

On Saturday, March 24th, 2018, fifty middle school chorus students from BFA Fairfax participated in an event hosted by United States Senator Bernie Sanders.  Senator Sanders organized what he called a “Town Hall Meeting on Arts and Education” in order to bring awareness to the importance of arts education in our school and the important skills and values that it teaches our students. 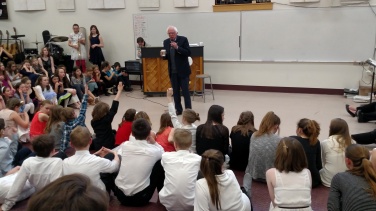 Seven choruses from around the state performed, including high school groups from area schools such as Essex and South Burlington High School.  In the words of BFA choral director Christina Maynard, “BFA students were engaged audience members for the rehearsals and were in awe of the performances by the high school groups.  They expressed their excitement to me and were wide-eyed as I reminded them that in a few years, they will be performing that caliber of music.”

Before the concert, Senator Bernie Sanders met with the over 200 students that attended (elementary to college students) in the Band room at CVU.  He spent about 45 minutes fielding questions from the students ranging from, “Did you ever sing in chorus?” and ‘What is your favorite band?”, to very serious questions about gun control and health care.  BFA Fairfax students asked thoughtful questions that truly reflected the high quality education that they receive. Many students were eager to talk to Mr. Sanders personally and were able to get autographs and photographs with him. 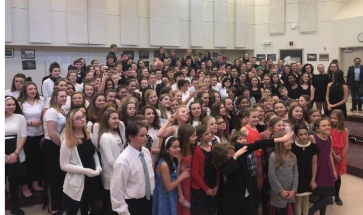 BFA Fairfax received many compliments on their singing as well as their outstanding behavior during the very long day.  It was a fantastic learning experience for our students and teachers and we are hoping that Senator Sanders will host the event again next year!  Thank you to our wonderful chaperones and the overwhelming community support for our music programs.

On Tuesday, March 27, the elementary school came together for the afternoon to celebrate music in our schools month. Students & staff were able to take part by listening to a variety of musical performances from teachers and classmates. The elementary school was treated to multiple musical acts including singing, ukulele, guitar, drum circle, saxophone duet, and even a guest appearance from the BFA Fairfax middle school chorus and high school band. It was wonderful to be able to come together for an afternoon to appreciate the talent, support, and pride that our school community has for the arts.

Lastly, on Wednesday, March 28, the Fairfax community was treated to the annual pops concert, with performances by the combined Fletcher and BFA Fairfax Elementary bands, as well as the BFA Fairfax middle school band and chorus, and high school band and chorus.  In front of a standing room only crowd in the Richard A. Brown Gymnasium, student musicians kept attendees swaying, clapping and tapping their feet to the sounds of pieces from Queen, the Who, the Beatles, and many other well-known groups. 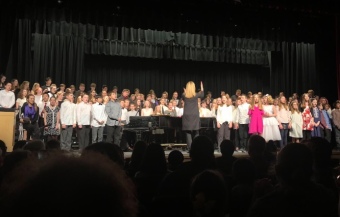 If the events of the past two weeks are any indication, music is alive and well at BFA Fairfax.  We need to extend our heartfelt thanks to our music educators Christina Maynard, Ian Flint, and Sarah Wolff, our supportive community members, and most importantly our talented student musicians.  We look forward to seeing you at our upcoming music events: 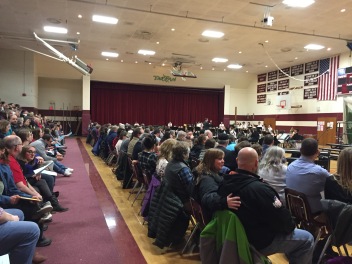