Indicator of Success –  Students and staff will apply existing knowledge to create original works as a means of personal or group expression.

n January and February, students in Emily Wills’ 7th grade class at BFA Fairfax learned about WWII. As a culmination to their study of the Pacific Theater, students made origami cranes to send to the peace memorial in Hiroshima, Japan. It was a positive way to end an examination of the atomic bombings of Hiroshima and Nagasaki, and a concrete means of connecting the Fairfax community with a community nearly 7000 miles away. 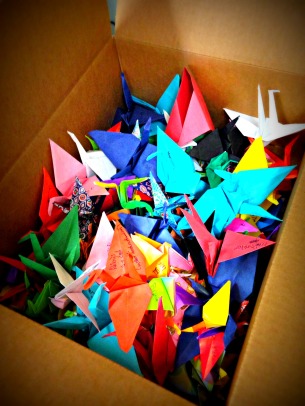 The idea of folding cranes to memorialize the victims of the bombing of Hiroshima originated with Sadako Sasaki, a girl who was two years old when the bomb dropped. Ten years later, she became fatally ill with leukemia as a result of the radiation from the bomb. Sadako began folding a thousand paper cranes because, according to legend, anyone who made a thousand cranes would be granted a wish. Sadako’s wish was to live. Sadly, she died before she was able to make her thousand cranes. Since then, people from all over the world have made origami cranes in her memory, and sent them to the Hiroshima Peace Memorial.