BFA Fairfax Football Receives Numerous Accolades For Actions, Both On and Off the Field

BFA Fairfax Football had a proud night at the 22nd annual National Football Foundation and College Hall of Fame banquet held at Castleton State College on Sunday, April 26.  The annual banquet recognizes the top youth, high school and college players, coaches, and contributors in the state of Vermont.  On the heels of a Division 3 State Championship season, the first in program history, Bullet Football took home four major awards issued over the course of the evening.

Coach Mike Williams was recognized as the 2014 Vermont State Coach of the Year.  Luke Langelier ’15 was awarded the Division 3 PRIDE Award, which is awarded to the top player in each of Vermont’s three football divisions.

Matt Larose ’15, was awarded the NFF Community Service Award, which recognizes the student-athlete who contributes most to the greater community both on and off the field. Finally, BFA Fairfax was awarded the Stan Amidon Sportsmanship Award for the second year in a row. This award is a true testament to the spirit, tradition, and sportsmanship demonstrated and shared not only by our players and coaches, but our fans and community as a whole. 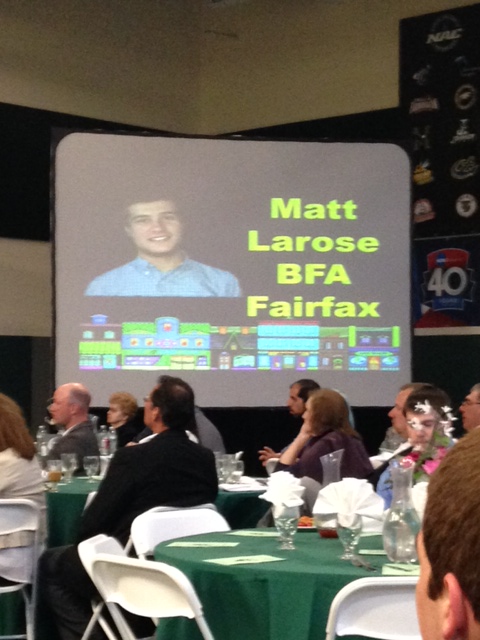 The BFA Fairfax school community is incredibly proud of these accolades, and look forward to another award-winning season on the gridiron in 2015!  GO BULLETS!