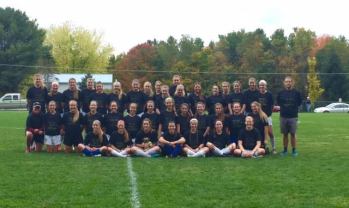 Student voice is a driving force in recent initiatives at BFA Fairfax, and that voice was heard loud and clear in its presence at the 2016 Homecoming soccer and football games this past weekend.

The “Red Card Cancer” initiative was the brainchild of BFA Fairfax student-athletes and National Honor Society members and was a highlight of this year’s Homecoming festivities. Hazen Union High School’s soccer teams, our opponent for this year’s JV and Varsity soccer homecoming games, was more than happy to join forces in support of this cause.

Through t-shirt sales, 50/50 raffles, coin drops, and bake sales at the soccer and football games, combined with generous donations, students were able to raise over $1000.00 to support the Sarcoma Foundation of America.

Even with the competitive nature of high school athletics, it is a proud moment and extremely rewarding to see that rival schools, teams, fans and supporters alike are truly ONE TEAM, and can combine forces toward the bigger, broader picture of cancer research and awareness.