The week of January 29 was a busy one for students and faculty in the BFA Fairfax Music Department.  The week not only served as the lead-up to the annual District 1 Music Festival, but BFA Fairfax was fortunate to be able to host a guest clinician to work closely with our band students. 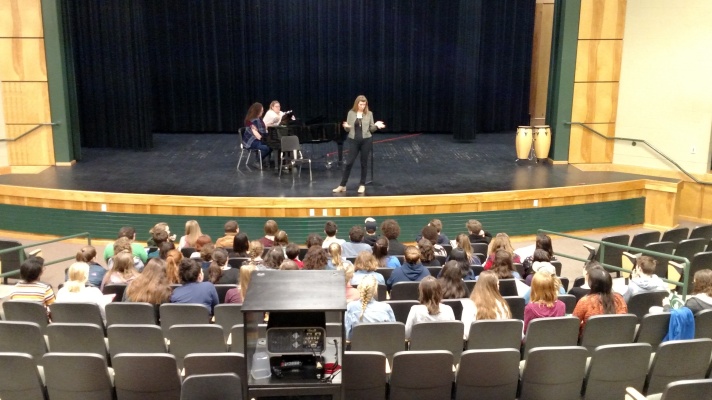 On Thursday, February 1st, BFA Fairfax welcomed Frank Parker to work with our middle and high school band students.  Mr. Parker is the director of bands at Quakertown Community High School in Quakertown, PA.  He spent the day working on musicianship and rehearsal techniques with our students.  According to BFA Fairfax Band Director Ian Flint “Our students are rarely exposed to any teacher but myself, so it is a great opportunity to have another director spend a rehearsal with them.  Mr. Parker had great things to say about our students’ level of achievement and what we have going on at BFA. Many things that we have been doing to grow the band program at BFA come from the model that they have in Quakertown, just on a smaller scale.”

Mr. Parker also served as the guest conductor for the Wind Ensemble at this year’s District 1 Music Festival.  He has conducted numerous festivals in the Mid Atlantic region and was very excited to come to Vermont and experience our educational system.

On the night of Friday, February 2nd, ten BFA Fairfax students participated in the District 1 Music Festival held at Enosburg Falls High School.  All ten students had auditioned previously and were accepted for spots in the chorus, concert band, or wind ensemble. Rigorous rehearsals on Thursday night and all day Friday culminated in a spectacular concert on Friday night.  BFA Fairfax Choral Director Christy Maynard stated “We are very grateful to Enosburg Falls High School for hosting the festival this year.  We enjoyed rehearsing in their auditorium and band rooms and were made to feel very welcome in their beautiful school.  The students had a chance to make new friends and experience working with guest conductors.

Congratulations to all participants in this year’s music festival!  We are looking forward to the next opportunity to hear the amazing talents of our student musicians at BFA Fairfax.