On December 22, I was fortunate to attend the BFA Middle School Poetry Slam organized by writing consultant and Vermont poet, Geof Hewitt and teacher Emily Wills. According to the Urban Dictionary, “a Poetry Slam is a competitive event in which poets perform their work and are judged by members of the audience. Everyone who signs up has the opportunity to read.” The Slam was so engaging, and the students so impressive, that I wanted to know what had led to this pre-school-vacation celebration of the spoken word. So I interviewed the teacher, Emily Wills.

LK: How did you introduce the concept?

EW: In the 17 school days between the Thanksgiving and holiday break, my students read a wide selection of poetry. They shared their interpretations of the poems, and also talked about what literary terms (such as metaphor, hyperbole, imagery, simile, and alliteration, as well as rhyme, rhythm, and repetition) they saw the author using in his/her craft.

LK: What did they do with that information?

EW: Students then used those authors as “mentors” and wrote their own poems that imitated the theme, style, format, or ideas of the poet’s original work. Students also had free range to write whatever poems tickled their fancy.

LK: What was the consulting poet, Geof Hewitt’s, role?

EW: On December 22, Geof came and led two one-hour writing workshops for my students in the morning. 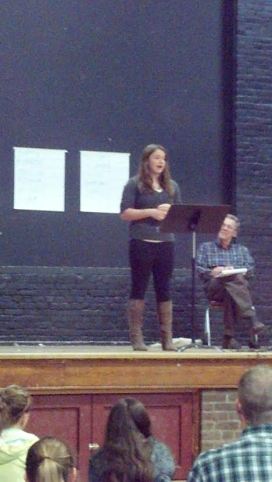 LK: What was the result of those workshops?

EW: He then coordinated the Slam in the afternoon.  The slam was open to all students, and of my 60+ students; 17 of them participated in the Slam. They had rehearsed in front of their class block the day before, and were invited live the dream on stage!

LK: What makes a unit like this so student-centered and successful?

EW: The great enjoyment I got from this unit was that students found their own voice. They found humor and depth in their writing, and it seemed like they had ownership over it because they felt freed by poetry’s lack of rules. Students who usually are reticent about their writing were willing to be open with it.  I think the majority of students felt successful during this unit, and culminating our work with a Slam was a great way to share their writing with an authentic audience!

I’d like to add 2 other hashtags to the description of this process and performance: #brave and #kindness. What I saw these students do on stage took tremendous courage; the poems and the performance triggered many emotions for both performers and audience members. The student audience embraced each performance and performer with such enthusiasm, empathy, support, and genuine kindness. It was a wonderful example of the “good will” generated by students that regularly takes center stage at BFA.

Indicator of Success for this Target: Students and staff create original works as a means of personal or group expression.

Linda Keating is the Director of Curriculum at FWSU. She is a regular contributor to the FWSU Blog. You can follow her on Twitter @Educate4ward